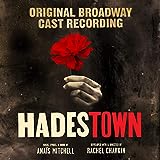 HADESTOWN intertwines two mythic tales — that of young dreamers Orpheus and Eurydice, and that of King Hades and his wife Persephone — as it invites you on a hell-raising journey to the underworld and back. ABOUT THE ALBUM: • This Tony-winning score defies musical theatre convention, weaving together American songwriting traditions from indie folk to pop to blues and beyond. • This album was produced by Grammy® winner David Lai (the 2009 West Side Story Cast Album) alongside Todd Sickaf

Want to get the absolute best rates and best quality when you record your album? Check us out! We provide THE best quality recording at the best rates for Nashville AND Los Angeles. You won't find better. Click here.